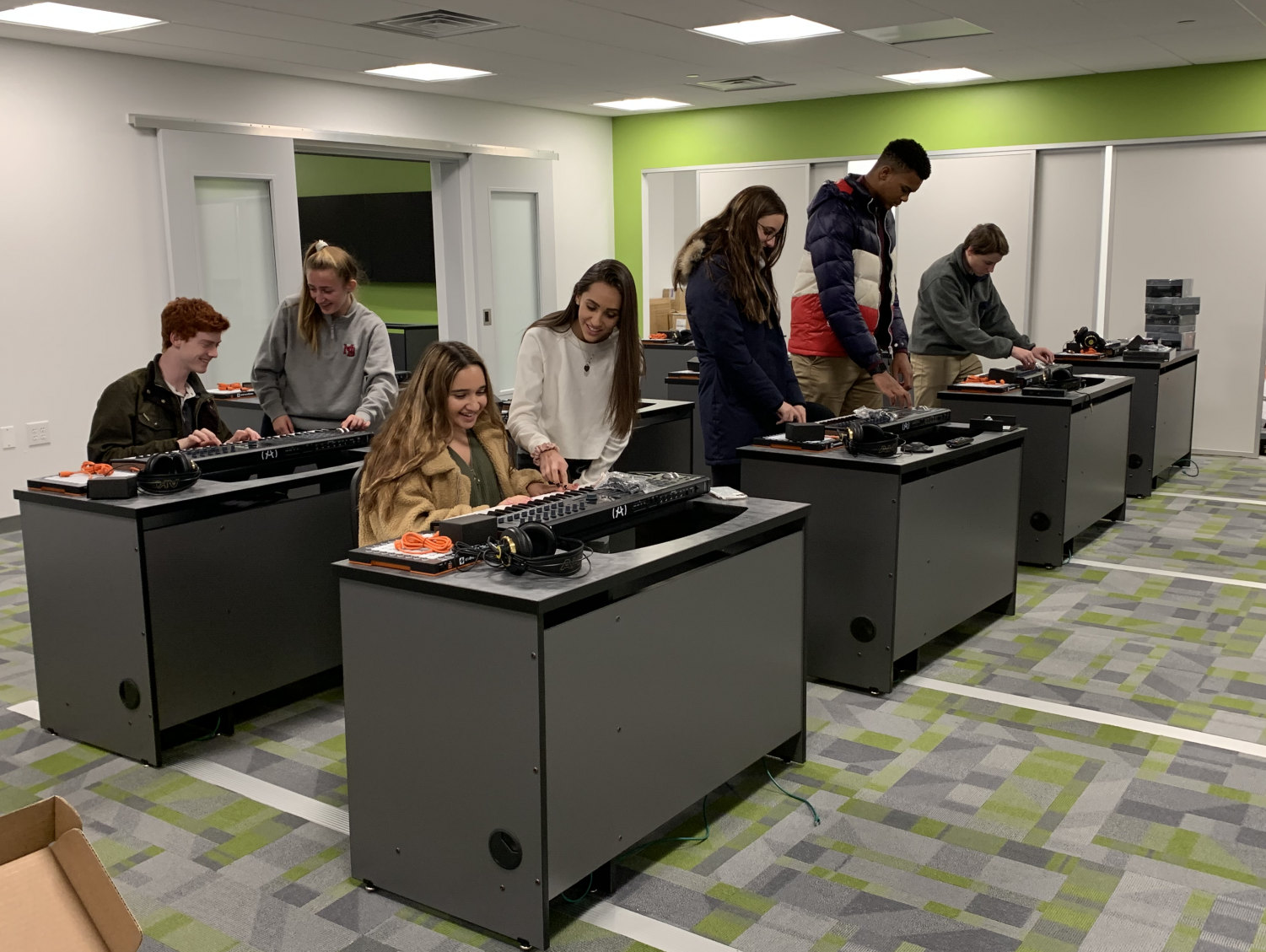 Eager students check out the new technology located in the CID. (Ari Bersch)

Eager students check out the new technology located in the CID.

Chances are, even before the ribbon cutting ceremony on the 8th of November, you saw people heading into the basement of the cafeteria, working on developing the brand new Center for Innovation and Design (CID). Spread out over 8,000 square feet underground, the CID includes rooms like a Makerspace, a new music studio, a computer science studio, an audio studio, a film studio, and a collaboration lab.

This project has been in development since 2017. The intent of the CID is to create a space for “students [to work] together on their own projects and for teachers keen to bring another dimension of communication and expression into their classes,” said Mr. Matt Martino. One of Martino’s main jobs at MBS is to bring the CID to life. He is just one of the many people involved with this task. Martino said that he hopes students get physically involved with “the integration of specific programs like, audio recording, video production, graphic design, and many other aspects of design/creative programs.”

The planning of the CID started back in 2017, when Burns first pitched the idea to the MBS Board of Trustees about what the space that would be empty once the Math and Science Building was complete could do for students.

Once the project was approved, the architectural planning could begin. This stage went on for about 6 months, followed by another 6 to 8 months of fundraising, and just under a year for the physical construction.

Martino, along with others, felt that building the space underground would pose a challenge that was unique. Martino states, “designing a new building is always fun as an architect.” He stands behind the fact that “a good architect and designer should be able to embrace whatever programmatic challenges are presented and think up a successful solution.”

Those who were a part of the process for the creation of the CID all hope that students get comfortable using the new technology. The intent is that students use it not only to build up their skills, but to deepen their learning in their everyday classes as well. Although the space will primarily house courses in the Design Arts and Sciences Department, other classes are encouraged to take advantage of all the CID has to offer.

Burns said that by building the CID, he wanted to create a space where students at Morristown Beard were not only ready for life after graduation from MBS, but in the real world as well. He reinforced his point by stating that “our mission statement is being prepared for college, for learning, and for life.” Innovation has a lot to do with just how the CID is accomplishing this goal, with the latest technology integrated throughout the entirety of the CID.

Dr. Owen Boynton, English teacher and Director of the CID, describes the unpredictability of the world as inspiration for the work being done by students in the new space. He says that “the economy, environment, and education itself are uncertain of their futures” and Morristown-Beard meets that uncertainty “with a focus on developing students’ skills and capabilities to innovate.”

It’s without a doubt that Mr. Burns, Mr. Martino, and Dr. Boynton would agree that what the CID is trying to accomplish will aid students in prospering not only in college, but also in the real world.

The Center itself opened in late November, where students have been using the space on their own time for any subject, in addition to using it during classes with teachers who have been looking forward to having a place where they can help their students integrate classroom knowledge into everyday life.