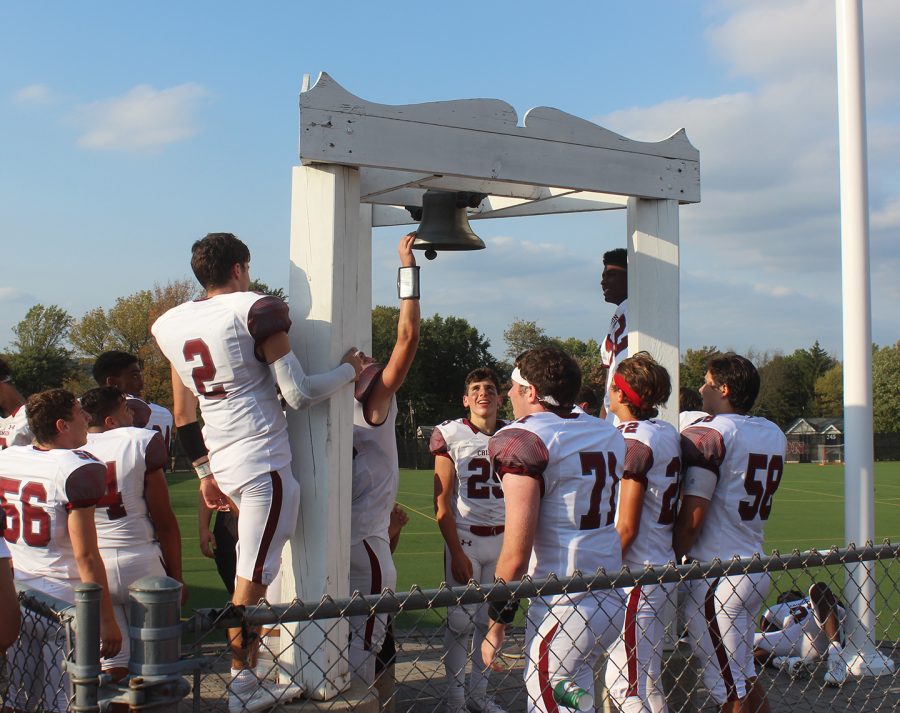 For a second year in a row, the Varsity Boys Football Team got to ring the Homecoming Bell.

Homecoming at Morristown- Beard School is an event where students can come together in support of their peers and in favor of school spirit. This year’s homecoming game for Crimson Football was held on September 28th against The Hopkins School of New Haven, Connecticut.

Students came out in packs to support their team wearing all white. The game was full of enthusiasm from the players and spectators alike, and brought the MBS community, alumni, and staff together.

During halftime, students watched as participants, ranging from teachers, to alumni, to students, and even to toddlers, ran the annual Kirby Mile.

Phoebe Merrigan ‘22 said “the crowd was invested. [They] encouraged the team, and runners, to perform as best they can.”

Varsity Football Head Coach and math teacher Tim Fell said, “The team has continued to develop, get closer, and play better. There is a lot that goes into a successful football game because there are so many moving parts. Obviously homecoming and playing in front of a big crowd has been great for the players.”

The game was full of highlights including a 96 yard touchdown by Nate Panza ‘20. In addition, the team had an impressive 4 interceptions including one caught with one hand.

James Marinello and Nate Panza rushed three touchdowns each. MBS ended with an impressive 13 point lead, with a final score of 40-27.

The team was able to ring the Homecoming Bell, making it a memorable night for players and student body. Captain, Nate Panza, says “Ringing the homecoming bell always feels special, especially as seniors, because you don’t want to let the community down. You want to keep the tradition from last year, and  we hope that the tradition will continue for years to come.”

After the game, the team joined the student spectators as they celebrated with free food from local food trucks. There was free pizza, a variety of ice creams, ice pops, and candy.

After the game, Panza said “the team has made giant strides in many aspects of our game since last year.”