Who is Josh Rockland? 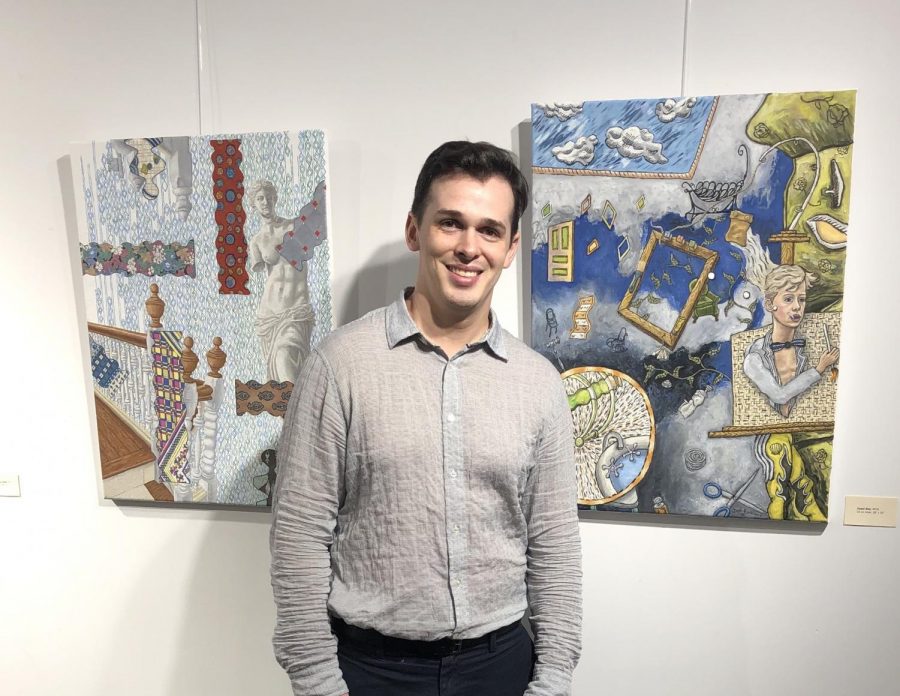 This past September, Josh Rockland opened his art show titled “Easel Boy” in the Phoebe Stiles King ‘49 Gallery in the Math and Science Center.

Rockland began his journey as an artist as a freshman at Morristown-Beard in Art 1. Rockland believes that “art serves everyone by enriching their lives. It reflects and teaches creative thinking, which can serve us in any professional field.”

Art 1 helped Josh to develop the basic components of drawing, but he also attribes a lot of his growth as an artist to both his participation in the spring musicals at Wilkie Hall (before Founders was built) and Dr. John Mascaro’s American Literature class.

Rockland’s artwork is personal, narrational, whimsical and surreal. It displays his love of antique architecture, furniture, portraiture, fashion, and artist’s materials.  He said, “I combine these autobiographical elements into fun and playful compositions that speak to unconscious dreams, memories, and desires.”

Rockland grew up in an 1866 Victorian home in Morristown, where both his parents collected art and antiques. They infused a love of rare objects into him. “Both my parents teach in academia and have invested their lives in the humanities. They showed me that ‘class’ might come from one’s education and values more than money.” These ideas steered Rockland to create art and make art an important part of his life.

Inspired by Picasso and Van Gogh at the Metropolitan Museum, Rockland began to build his own unique style in high school by experimenting with unconventional subject matters, compositions and cartoon like drawings.

Although he still loves to draw, painting is Rockland’s favorite medium because of the elements of composition, color, subject matter and narrative. “I prefer oil paintings on linen since linen is a finer, luxurious material and oil paint allows for sumptuous color and creamy consistency.”

One of Rockland’s favorite pieces was inspired by a photo a friend took of him by a weeping cherry tree in his front yard. It was his junior year at Morristown-Beard, and he was wearing an outfit painted with flames, biting into a Granny Smith apple. “By merging necktie patterns into the background I created a playful Garden of Eden scenario with an apple, flames, and ’snakes’,” he said.

Because Rockland’s artwork is so detailed and corresponds to so many artistic components, his paintings typically take around 25 hours to plan, sketch, and draw, and 60 hours to paint. He can complete one painting in about 2 weeks of full-time commitment, or in about a month of part-time work.  His newest paintings can be found at joshrockland.com

Today, Rockland pulls inspiration for his artwork from other painters, musicians, writers, and media.

In addition to Willem de Kooning’s color and Vincent Van Gogh’s expressive brush strokes, Rockland appreciates the music of the Beatles and Billy Idol, as well as the writing styles of classical literature authors. However, he enjoys movies most of all because they “combine writing, visuals, music and acting to tell a story; Alfred Hitchcock is my favorite filmmaker. The best art in any medium never gets old.”

After pulling so much inspiration from the world around him, Rockland hopes that his art inspires those around him. “If I can find a way to produce work on my own terms that plays to my strengths and fulfills a creative mood, hopefully others will respond to it. You initially make [art] for yourself then hope it will find an audience,” he said.

After he fell in love with art at Morristown-Beard, Josh received his BFA from Mason Gross School of the Arts at Rutgers and a Masters of Arts in Teaching from Montclair State. He now teaches art at Memorial Junior School in Whippany.

Last March, Josh visited Morristown-Beard to discuss the creative process and teaching with the contributors of Mariah, the school’s literary and art magazine. “The Arts and Education are two institutions to be treasured. I hope to inspire MBS students to appreciate the arts and wholeheartedly pursue their life’s passions.”

If you want a picture to show with your comment, go get a gravatar.