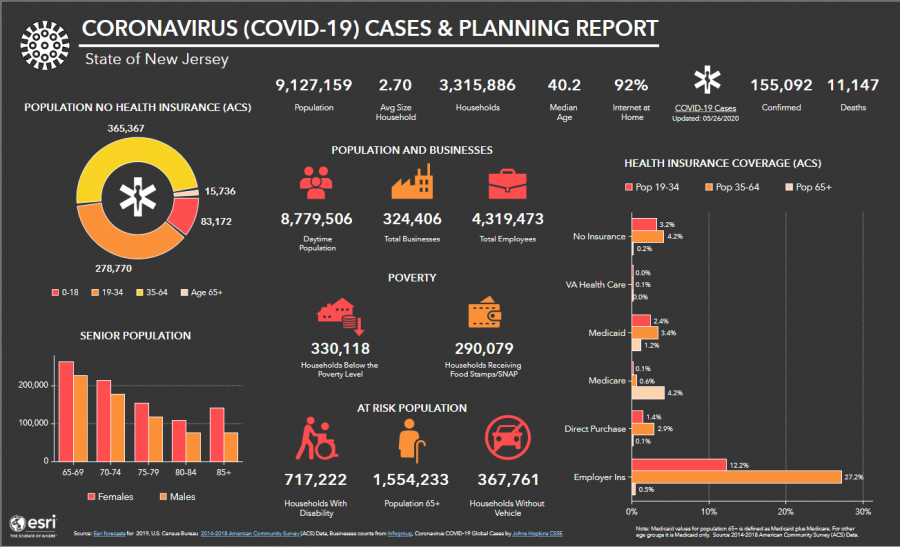 A holistic look at how COVID-19 is affecting vulnerable populations in New Jersey.

There is no doubt that COVID-19 has changed the way that everyone lives and works.  However, this shift is especially clear in a group of people whose careers have put them on the front lines against this invisible enemy.

Dr. Ira Kirschenbaum, Chairman of Orthopaedic Surgery at the BronxCare Health System, works in the Bronx, in particular an area characterized by a stark socioeconomic distinction, in that the BronxCare Health System sees, according to Dr. Kirschenbaum, “a majority of patients below the poverty line.”  It is important to note that such an overwhelming statistic can make such populations even more vulnerable to such a pandemic.  In an environment where it is already difficult to make ends meet, rapidly increasing unemployment rates and consequent inflation makes surviving this pandemic even more difficult.  To compound this, social distancing is made difficult by the nature of housing in the Bronx.  This, among other reasons, is why Dr. Kirschenbaum described the Bronx as “the epicenter of the epicenter” of the COVID-19 pandemic.

As with any crisis, context is crucial to understanding the scope of the problem at hand.  The BronxCare Health System saw over 1.1 million visits last year and is a community healthcare fixture.  With COVID-19, Dr. Kirschenbaum emphasized that “the known episode of care” has changed.  A “known episode of care,” as Dr. Kirschenbaum explained, is the progression of post-diagnostic treatment.  He cited the example of a patient in need of knee surgery. The events after surgery are relatively predictable, but with COVID-19, it is difficult to predict each patient’s specific response to the illness due to the many ways the virus can manifest itself in the human body.

Since Governor Andrew Cuomo (D-NY) permitted only essential surgeries to take place given that New York State was the global epicenter, Dr. Kirschenbaum said, “our [orthopaedic] clinic volume was cut in half,” elaborating that “patients were more comfortable sequestering at home instead of coming into the clinic for their regular appointments.”  At the surge of the pandemic, the hospital was filled to an expanded capacity as “a majority of beds, at that time, were filled with COVID.” Front-line healthcare workers faced a reality where during this time period this disease had a higher than normal mortality rate and “90-100 ventilators were needed on any given day.” This took its toll on the healthcare workers whose areas of expertise put them on the front lines.  Fortunately, the BronxCare Health System had no issues with adequate personal protective equipment (PPE) due to the dedicated work of the hospital administration including Dr. Kirschenbaum. Nonetheless, Dr. Kirschenbaum said “for the people on the front line, like in the emergency room, fighting this disease is like being in a boxing match without breaks between rounds.”

For the people on the front line, like in the emergency room, fighting this disease is like being in a boxing match without breaks between rounds.”

This once in a generation reality began to subside as the curve flattened, leading into where the crisis stands now.  Dr. Kirschenbaum likened the pandemic to World War II, stating that at present, we are “a week after the bombing of Pearl Harbor because we are trying to organize ourselves from an extraordinary experience.”  Social distance rules still apply, and many patients prefer not to go to the doctor unless they absolutely have to.

While fewer people are visiting the hospital, it does not mean that fewer people need medical care.  There are still people with non-COVID-19 related illnesses in need of medical attention.  In these cases, telemedicine has become an important tool. Telemedicine is the practice of remote consultation through a digital platform, in which patients can access medical care without stepping foot in a hospital or doctor’s office.  Telemedicine provides an opportunity for remote consultations, but it has its shortcomings.  While it has been helpful during the pandemic, it is hard to imagine teleconsultation extending significantly beyond the reach of COVID-19.  Dr. Kirschenbaum had his fair share of teleconsultations with patients, acknowledging its limited advantage: “it can’t substitute for feeling an unstable joint or listening to the heart or feeling a mass.” In order for telemedicine to actually gain traction in medicine beyond fields such as dermatology and potentially ophthalmology, the technology needs to catch up.  As Dr. Kirschenbaum said on the current system of telemedicine, “it is not the future of healthcare by any means. Why? For example, I can’t take the X-Ray,” said Dr. Kirschenbaum, meaning that it disrupts the known episode of care.  In Dr. Kirschenbaum’s opinion, telemedicine, though a promising field, at present, does not offer much to medical professionals once COVID-19 completely subsides because the technology is not where it needs to be to compensate for an in-person consultation in many medical fields

[Telemedicine] can’t substitute for feeling an unstable joint or listening to the heart or feeling a mass.”

The COVID-19 pandemic has also brought the shortcomings of the United States Healthcare system to the fore.  With vulnerable populations, such as those in the Bronx living below the poverty line, disparities in population health are exposed. It is becoming increasingly clear that the healthcare system is not where it needs to be.  The fact is, the United States was not ready for this pandemic.  And while mechanisms meant to buffer the impact of a given public health crisis are highly contested — namely, the Affordable Care Act — they started a conversation which never quite reached a consensus.  In the Democratic Debates, the concept of Universal Healthcare has been covered superficially, but the implementation of such systems remains unclear.

Dr. Kirschenbaum, a proponent of Universal Healthcare, offered a very realistic view of the current situation, and where it is heading in the future. “I believe that eventually we’re going to get universal health coverage.  It will probably be a combination of public and private options, but everyone needs to be covered.” He continued,  “the earliest I can see it happening is when your generation [current teenagers] are already 10 or 15 years in [medical] practice.” He believes this is because implementing this type of systematic change would be a “monstrous undertaking.”  It would involve unraveling a system based on a specific culture of how things have been done in the medical world for years. In Dr. Kirschenbaum’s words, the end goal is for everyone to “have access to a set of healthcare opportunities, either private or public, that are universal.  If you need any type of care for any type of disease, it will be covered.”

Dr. Kirschenbaum shared that “when 20 to 40 million people” don’t have health insurance, this means that a health crisis like the COVID-19 pandemic would hit these populations the hardest both medically and economically.  Therefore, the primary concern here is increasing access to healthcare for those unable to afford health insurance by private companies. Specifically, this would manifest in the form of a Modified Total Coverage Plan, in which, put simply, “those who have it, keep it.”  Those lacking access to privatized health insurance for any number of reasons still can access medical care by means of a public option.  The point of universal healthcare is to ensure everyone, including vulnerable populations, has some form of healthcare.

But that’s easier said than done. This type of change requires an alignment of all of the varied levels related to the government.  As Dr. Kirschenbaum explained, “It would take an understanding that universal healthcare programs are what a citizenry is entitled to.  And we don’t have that kind of environment just yet,” continuing that “Maybe you need an FDR [Pres. Franklin D. Roosevelt] and a crisis and say, ‘we don’t have a choice.’  We are going to have to ensure universal healthcare.”

But as of now, the United States is once again wasting time.  “We’re missing opportunities to improve so many of the important aspects of medicine,” said Dr. Kirschenbaum.  In a distant future, 10-15 years down the line, telemedicine will hopefully be technologically adept enough to work with universal healthcare.  A mall may have a kiosk for X-Rays and diagnostic tests, free of charge to the patient.  And in this distant future, we’d be seeing a “much more efficient” world of healthcare than the one we’re living with today.

Everything makes it worth it.”

Regardless of how much time passes, the role of the healthcare professional, at its core, will remain a constant.  And when I asked Dr. Kirschenbaum what makes it worth it, to continue doing the lifesaving work he and countless others do at such a drastic mental and emotional cost, he simply stated “Everything makes it worth it.”  It is the role of the medical professional to fight the good fight, against an invisible enemy.  “This is what we signed up for,” said Kirschenbaum, “These are the challenges that, at every level, [we] should view as a privilege to treat patients during this time.”