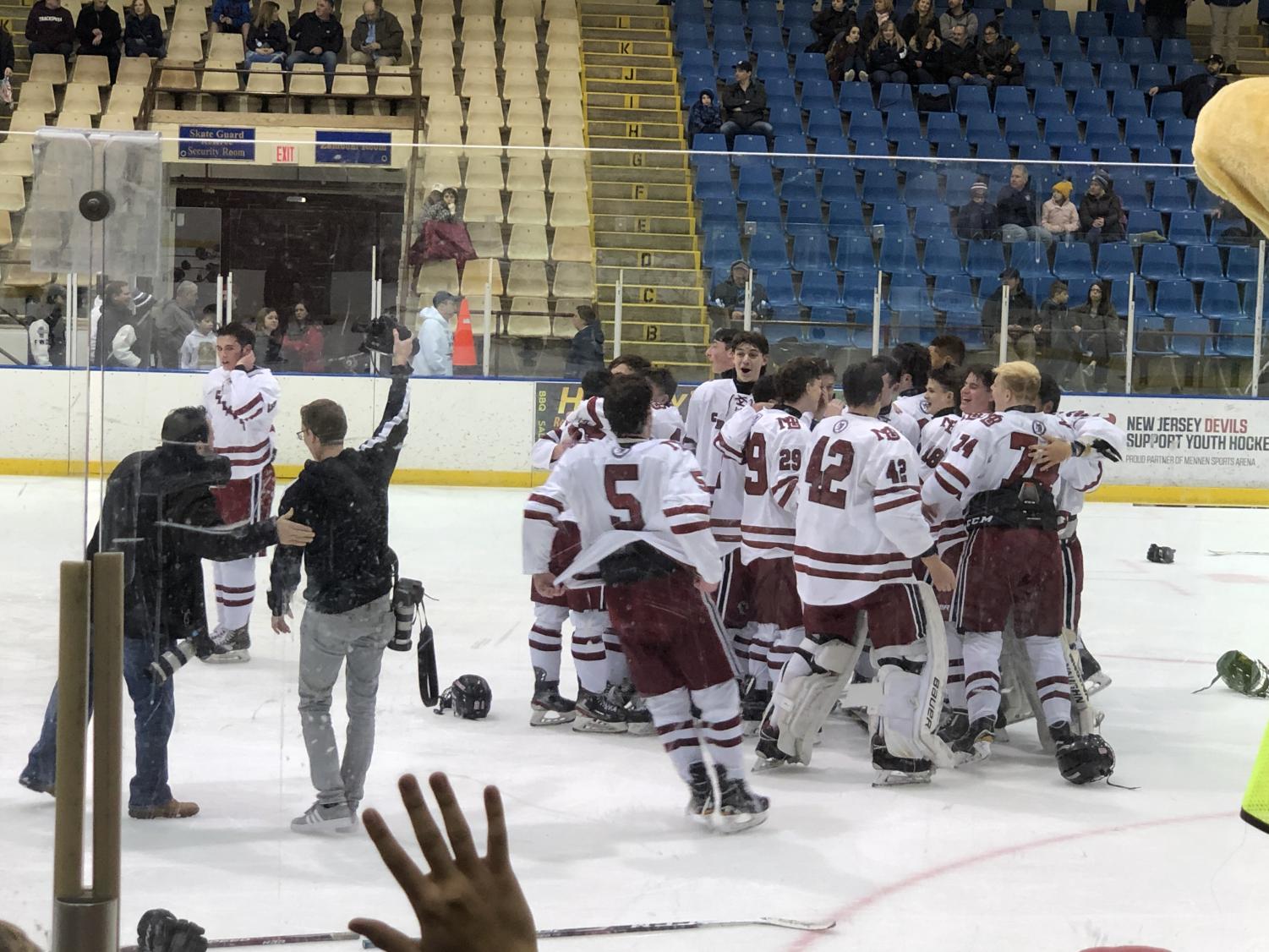 The team rejoices after winning the Mennen Cup. (Crimson Staff)

The team rejoices after winning the Mennen Cup.

After its first losing season in over a decade last year, Morristown-Beard Boys’ Hockey has returned to the forefront of New Jersey boys’ hockey in the new decade.  The team recovered from its two-game losing streak at the start of the season with 15 victories in its last 17 games, with the only setbacks being a 5-5 tie at the Hun School and a 7-3 defeat to perennial power Don Bosco Prep.  Having clinched the Mennen Division by defeating Chatham 6-0 on Friday, January 31, MBS became the top-seeded team in the Mennen Cup.

The Crimson’s turn-around this season begs the following question: “What’s changed?”  Team captain Paul Detre,  ‘20, believes “the biggest difference between this season and last season is the strength of the locker room, and our ability to get off to quick starts. We did lose our first two games but we were able to rebound against Morristown [High School] and never looked back.” He continued, “last year we never got into a rhythm early in the season, but this year we really hit our stride.”

Attitude plays a significant role in the team’s success. Tristan Long ‘21, said the biggest difference is “our attitude; we are much more dedicated [to the team] and dedicated to each other and the cause we share.”After the first two losses, Coach Scott Greene played a video for the team. Roman Berger ‘23 recalls this moment clearly: “The video is of a per tryout speech from Penn State Football. It starts with telling the story of a battle between two wolves. The positive wolf, and the negative wolf. There is a son and a father watching the battle and the son asks, ‘Dad, which wolf will win?’ He responds by saying, “The one that you feed.” The coach goes on to say feed the positive wolf. Feed the wolf that helps you and your teammates.”  The mentality that attitude, when channeled for better, ultimately results in success was embraced by the team.

The turning point of the season, undeniably, was the game against Morristown following the two opening losses. As Detre puts it, “Morristown vs Morristown-Beard is a huge rivalry, and being able to get pumped up before that game and then playing a really solid game, getting a win,  got us on the right track.”  After defeating Morristown 7-1, the Crimson rattled off nine more victories, including an especially meaningful victory over top-ranked Bergen Catholic at Mennen Arena on December 19.  Tied at two goals apiece after two periods, the Crimson scored three unanswered goals in the final period to win 5-2.  “As soon as that happened,” said Roman Berger, ‘23, “we realized that we could beat anyone we wanted to.”  Berger, one of two freshmen on the Varsity squad, went on to explain that “we knew something amazing was going to happen.”  That confidence is present in all members of the team, from one of its youngest to one of its most experienced.  As Captain Ryan Brown, ‘20, put it, “we all believe the state championship is within reach.”

This year’s team was ranked as the fourth-best team in New Jersey in the 2010s decade by nj.com.  The article noted that the Crimson won six Mennen Cup titles in the decade, and made special note of the team’s appearance in the Non-Public State Final back in 2014, in which they tied with Christian Brothers Academy.

If you want a picture to show with your comment, go get a gravatar.